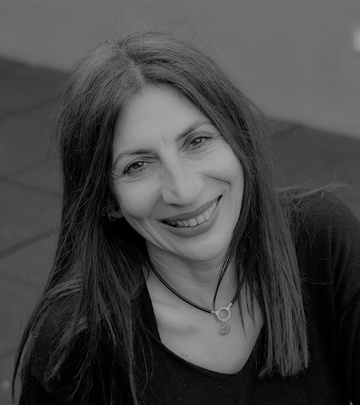 Né Barros (Manuela Barros) choreographer and dancer, is a member of the Direction of balleteatro of which she was a founder. She has been developed her artistic work in connection with her scientific studies and research. Aesthetics and contemporary dance and performance are the principal fields of her inquiry. In 2004, concluded her doctorate in Dance (FMH, Universidade Técnica de Lisboa), with the thesis: Body and Meaning: a proposal on dance materiality. In 1992, achieved a Master of Arts in Dance Studies (Laban Centre, City University, London) with a performance Silent Thoughts and a text Dance as discourse. She studied sciences at the University of Porto and achieved a B.A. degree in theatre (ESAP). She began her training in classical dance and later worked contemporary dance and choreographic composition in the United States, Smith College. She has presented most of her performances with company balleteatro since the beginning of the nineties. In 2007 she was invited by the Teatro Nacional S. João to present a Cycle Né Barros, where some of her most important works were presented together with a series of performances and the premiere of With Drooping Wings. She also worked with the National Dance Company where she presented Passos em Branco (1999) for which she received the award for Best Choreography, and with Ballet Gulbenkian where she premiered exo (2001). Within a joint programme of Centro Cultural de Belém and Remix Ensemble she presented in 2002 Nº5, performance which represented Portugal in the encounters Repèrages de Danse à Lille (France). Her works are regularly performed in cooperation with several artists of the areas of photography, cinema, music and plastic arts such as Daniel Blaufuks, Cesário Alves, Filipe Martins, Saguenail, Carlos Assis, Alexandre Soares, Sérgio Azevedo, Carlos Guedes, Roberto Neulichedl, Gabriela Vaz, José Álvaro Correia, Nuno Coelho, Albuquerque Mendes, Nuno Carinhas, Vera Castro, Alexandra Cruz, Manuel Casimiro, ELASTIC Group of Artistic Research. Special highlight to the cooperation with Lygia Pape in the reconstruction of their Ballet Neo-Concretos presented in Serralves (2000). As an actress, was the lead actress in Saguenail’s film Ma’s Sin and in theatre special reference to the part of Ophelia, in Heiner Muller’s Hamlet Machine, in a direction of João Paulo Seara Cardoso and Isabel Barros. In 2006 and 2007 she was a member of the board of selection in the Festival of short films of Vila do Conde. Has been supervising thesis on performance and dance and new technologies. She has been taught in several institutions, FMH, ESD, ESE and ESAP. Researcher between 2005-07 at IHA Estudos de Arte Contemporânea and currently, collaborating with the group of “Theory, Criticism, History and Practice of Contemporary Art” of CEEAA and as researcher in the group “Aesthetic, Politics and Art” of the Philosophy Institute (Universidade do Porto). She has published several articles about the body and performance arts in national and international publishing. Has organized different events, spotting for: Platform of Portuguese Dance in Italy (1999); International meeting Metamorphosis of Feeling having as a central figure the philosopher Mario Perniola, resulting an homonymous publication (1998). More recently, in 2009, was in the organization and scientific committee for the encounter “Performance, Dance and Theatre and News Discourses” promoted by CEAA. In 2009, published two books: Da materialidade na dança (transl. One the materiality of dance) and Story Case print, this one in co-authoring.