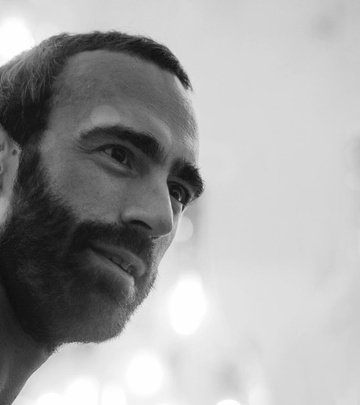 biografia
Jorge Gonçalves works as an independent curator, choreographer, dramaturge, production manager, performer, teacher and other practices related to the performing arts and cultural field. Jorge holds a MA on Choreography at Amsterdam University of Arts (AHK, Amsterdam, 2014), a post-graduation on Artistic Performance - Dance (FMH, Lisbon, 2006), Contemporary Dance course at Balleteatro Escola Profissional (Porto, 2005) and a degree in Electrical and Computer Engineering (FEUP, Porto, 2002). Co-founder and director of MEZZANINE, since its foundation from 2009 to 2017, he developed a series of curatorial events with multiples formats at Porto, Portugal. From 2008 to 2011, he also co-founded and directed Obra Madrasta, an artist-run platform and network. In 2009, he was the co-responsible and artistic director of OOPSA Association and from 2010 on, he has collaborated with various institutions as Uferstudios Berlin and Tanzfabrik Berlin. On different contexts as in theatres, museums, galleries and site-specific, Jorge’s following work has been presented at Portugal, Germany, Austria, Spain and the Netherlands: Duet (2006), Fiction (2009), Gilet (2009), Antoine (2010), Third Act (2010), Open Season (2011), Conquest of Deborah Hay (2011), A suspended gesture (2014), Holding the hands at the tip of my words (2017), The world of immaterial and common hands (2018). Jorge has worked as a dramaturge with Goro Tronsmo, Muscle Temple, (2012-2015), Daniel Kok (Cheerleader of Europe, 2014 and The Gay Romeo, 2011) and Keith Lim (re: self, 2011). He was the choreographic collaborator for Mathilde Monnier in Surrogated Cities, an opera by Heiner Goebbels, at the Ruhrtriennale 2014.As a performer and dancer, Jorge worked and toured for choreographers as Anna Pehrsson, Daniel Kok, DD Dorvillier, Dinis Machado, Elisabete Finger, Goro Tronsmo, Isabelle Schad, Keith Lim, Litó Walkey, Mathilde Monnier, Né Barros, Rebecka Stillman, Susana Otero, Ula Sickle, among others. He has been collaborating with various institutions at Portugal (Balleteatro, Ballet Contemporâneo do Norte, LaBInDança, Asas de Palco, MARTE and Casa da Música) and internationally (HZT and Tanzfabrik Berlin) by giving workshops and mentoring performing arts students. He is an associate artist of Balleteatro.