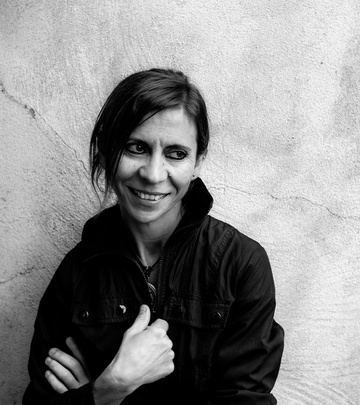 Isabel Barros throughout her career has developed her work as a choreographer, performer, programmer and trainer. She was born in Porto and she is a member of the Balleteatro direction of which she was a founder. After her initial training in classic dance with Ruth Howner she attended several courses in contemporary dance and composition in Paris where she lived and studied. She attended several seminars run by Giséle Barret and Pierre Voltz in the Institut d´Études Théatrales – Paris III. In Berlim 1996 she worked as a trainee with Susanne Linke where she worked in the area of solo performance. She studied theatre and concluded her degree in the Curso Superior de Teatro in Escola Superior Artística do Porto. Since 1992 she has presented her works regularly namely: Sobressaltos in-de-gestos, Os vestidos que eu lhes emprestei já não são meus (1993), 3ª Estação, co-created with João Paulo Seara Cardoso (1994), Perigo de Explosão (1995), Eléctrica (1996), Máquina-Hamlet, co-created with João Paulo Seara Cardoso (1997) and Screen 24 fracturas expostas (1997), Acidente de Automóvel Cor de Laranja 10 Vezes (1998), Delete (1999) and Quarto Escuro (2001). In co-production with Teatro Nacional S. João, Pó is presented, from the story of Romeo and Juliet, included in the programme Ícones (2002). In co-production with Rivoli Teatro Municipal, Là où je dors (2002) is presented, Olivia (2004). Alugo-me para sonhar (2007), Alice do Outro Lado do Espelho (2007) maintains the same theme developed in other creations, this is, the realm of dream as the biggest place. In 2008 she was invited by the dance company movement incriativo for which she created A Visita do Rinoceronte. In her performances she has collaborated with several artists such as Pedro Tudela, Albuquerque Mendes, Carlos Guedes, Jonathan Saldanha, Teresa Branco, Regina Guimarães, Jorge Costa, Helena Medeiros, Daniel Worm d’Assumpção, Nuno Meira, Nuno Gama, João Paulo Seara Cardoso, Roberto Neulichedl. She cooperates regularly with Teatro de Marionetas do Porto, regarding movement and choreography in their performances: Joanica-Puff, IP5, Óscar, Macbeth, Paisagem azul com Automóveis, Cabaret Molotof, Boca de Cena Teatro Jantar and Wonderland. She has also done choreographic direction in the performance O Lobo Diogo e o Mosquito Valentim, directed by João Paulo Seara Cardoso and performed to the public at Casa da Música in Porto. As a programmer she conceived for Balleteatro Auditorium several performance cycles in the areas of dance, theatre, and music emphasizing broad and alternative styles and reserving moments for upcoming creators. She received prize «Prémio Almada» awarded to Balleteatro as merit for the work done in terms of programming. Regarding the previous activity she has cooperated with several national and international networks and she is a member of the artistic board of Repérages Danse à Lille. Since 1999 as a member of the board, she is responsible for choosing Portuguese or Portuguese resident choreographers to participate in the annual sessions of that young choreographer’s festival. Since 1991, time when she began a study in the representations of Body in Dance and Theatre, she runs training workshops in that field. In 2003 she thought of a project for children «balleteatrinho» (little balleteatro) that has been extended to several communities and locations ever since. She is a teacher in Balleteatro, in the ESAP and the Escola Profissional de Música de Espinho and guest teacher in other institutions. She is responsible for coordinating several artistic projects of a social nature. She received the first prize Giros – Arts festival, an event APNA (Association for the promotion of New Artists) for the work done with dancers, musicians and a group of people with disability in cooperation between Balleteatro and the Northern Regional Centre for Palsy. In 2008 she published her first book, « Quando é que chegamos?», especially written for children.