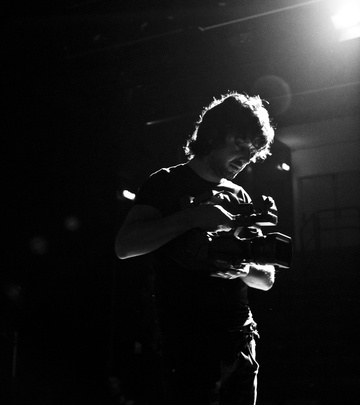 Filipe Martins is film director, professor (ESMAD-IPP) and researcher (IF-UP). His filmography includes films in the genres of fiction, documentary and videodance, selected in several national and international film festivals. He directed short films such as House of Glass, winner of the Voices Short Award 2019 at the IFFR (International Film Festival Rotterdam) and the best short film award at the Mediterranean Film Festival Split 2019 (Croatia), also having been selected for competition at festivals such as Clermont-Ferrand (France), Telluride (USA) and Melbourne (Australia) and shown at the Pompidou Center (France); Landing (best Portuguese Cinema Now Film award at the Lisbon International Film Festival (2016), international Premiere Video award at the Avanca Film Festival (2016), special mentions of the Jury at the Caminhos do Cinema Português Film Festival (2016) and at the Paisagens Film Festival (2017); Untraceable Patterns (best portuguese director award at InShadow (2012);  and Dido and Aeneas (competition at the Short Film Festival of Vila do Conde (2007). He also directed two feature films: This Film (Fantasporto, 2002) and Madonnas from Sé (best feature film award at the Paisagens Film Festival 2019 and best feature film award at the CinEuphoria 2018). PhD in Communication Sciences (2014), with a fellowship by FCT; Master’s degree in Contemporary Culture (2005) and degree in Art and Communication (2002). Post-doctorate in Philosophy from the University of Porto (2020), with a research project entitled Performativity and Aesthetic Experience: for a phenomenology of cinema. Researcher at the Philosophy Institute of the University of Porto, in the Research Group Aesthetics, Politics and Knowledge (APK). Regularly participates in conferences and academic meetings, with interventions in the fields of semiology, narratology, aesthetics, and film studies. His PhD thesis is published under the title Sentido Narrativo (Narrative Sense) (Afrontamento, 2016). He organized or co-organized the books Memory and Aesthetic Experience (2020), Unframing Archives (2018), Trajetos da Narratividade (2017), Deslocações da Intimidade (2015) and Das Imagens Familiares (2013). He also published two fiction books. Codirector and programmer of the Family Film Project – Archive, Memory and Ethnography Film Festival, which takes place annually in Oporto since 2012. Coordinator of conference cycles such as the Narrative, Media and Cognition (FLUP) and the Cinema and Audiovisual Forum (ESMAE). Professor at the School of Media Arts and Design of the Polytechnic Institute of Porto (ESMAD), and currently Director of the Master’s in Audiovisual Communication. He taught for several years at the Balleteatro, at the University Art School of Porto (ESAP) and at the School of Music and Performing Arts (ESMAE) in areas related to film script, film directing, acting and post-production.