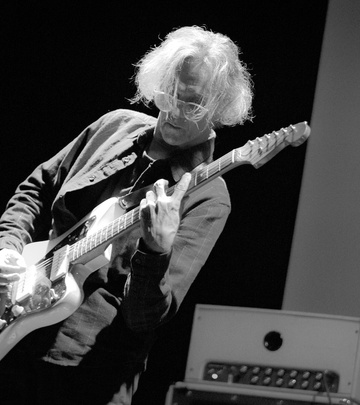 Co-founder of the band GNR as a composer and guitarist, he began his record career in 1980. In 1988 he releases his only solo album, Projecto Global. In 1990 he was responsible for the musical composition for the Sam Shepard play “Cowboy mouth”. He was also the author of the music for the dance performance Barcos Negros, which won the first prize of the International Lisbon Dance Competition. In 1993 he cooperated in the project Zero, with whom he recorded the presentation album. In the exhibition La Imagen Frágil of the Fundacion La Caixa Barcelona, he produced a sound intervention in the installation Señor Estupor by Javier Dias. It was also in 1993 he had the first connection with the band Três Tristes Tigres in the album Partes Sensíveis and in the collection of songs by António Variações with Anjinho da Guarda. In his involvement with Três Tristes Tigres the albums Guia Espiritual and Comum came out. He was considered the composer of the year in 1998 by the newspaper Público. He wrote the soundtrack for the João Canijo film Sapatos Pretos. He was invited by the Teatro Nacional S.João to write the original sound score of Buenas Noches, Mi Amor, a video musical device with Al Berto’s texts read by João Reis, performed in February 1999. He presented in CCB and Rivoli with the band Três Tristes Tigres, the show Ferida Consentida, based on the book um beijo dado mais tarde by Maria Gabriela Llansol. He collaborates since 1999 with Né Barros for whom he wrote the sound score of Vooum, No Fly Zone, exo, Vaga, Dia Maior, Segundo Plano and Story Case.