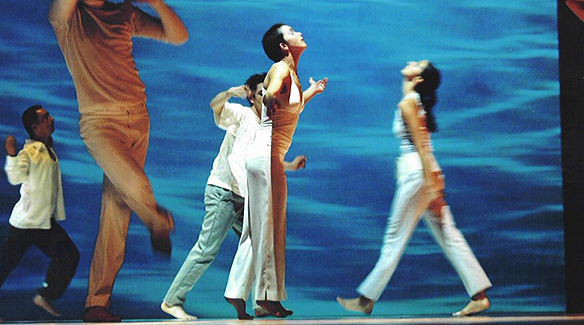 Vooum is a beautiful series of explorations along the theme of geography: the geography of travel and the geography of the human heart. It utilizes one of the most thoroughly satisfying juxtapositions of film and live mouvement I’ve ever seen. The film footage (images of maps, airplanes, a variety of locales - some exotic, some familiar) firmly establishes the theme of travel. The movement poignantly embodies the impossibility of ever arriving at one’s final “destination”. The individual dancer’s movement vocabulary is lush and released, but is often contrasted with a cooler sense of geometric precision in the form of diagonal group formations. One of the most impressive aspets of this piece is that the projected images and the live images never seem to compete with one another. The peacefully co-habit the stage, resonating off each other in endlessly fascination ways. (Roger Copeland)
Direcção e coreografia Né Barros
Música original Alexandre Soares
Cenografia Daniel Blaufuks (com a colaboração de Alexandra Cruz)
Desenho de luz Carlos Assis Figurinos Maria João Sopa Intérpretes Alberto Magno, Andreia Mesquita, Carlos Silva, Edgard Fernandes, Elisabete Magalhães, Paco Nevado, Joclécio Azevedo, São Castro, Sara Castanheira, Sónia Cunha
Produção balleteatro Estreia Rivoli Teatro Municipal