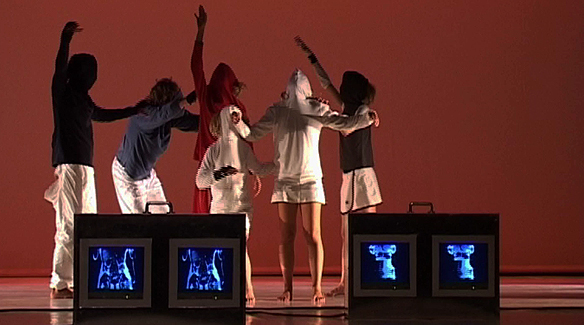 Wave, which is a continuity, as in a mental voyage, to two other previous productions, (…), completes a discourse ramified in several branches, in its double nature of work divided-united in a formal, first half made up of passages in-out of scene and intense micro dances that are born from variations about “families of gestures”, according to a trend that the American post modernism offered to the old Europe, and in a second half “expressive-performing” with the dancers with their face covered paying attention to a collective work of riddle improvising. The choreographer explains: “The reading of the show, to me, should be understood in the meaning of loss, of un-memorization, of the emptying, of the isolation also as a metaphor of the psychological nakedness and of the identity in its impersonal condition”. (Elisa Vaccarino)
Direcção e coreografia Né Barros
Música original Alexandre Soares
Objectos de cena e vídeo Elastic group of artistic research (Alessandro Ladaga e Silvia Manteiga)
Figurinos Maria João Sopa
Desenho de luz Carlos Assis
Intérpretes Gisela Reis, Jorge Gonçalves, Maria Albornoz, Pedro Ramos, Sónia Cunha, Tânia Rodrigues
Estreia Teatro Académico de Gil Vicente
Co-produção balleteatro companhia, Teatro Nacional S. João e Coimbra Capital Nacional da Cultura 2003