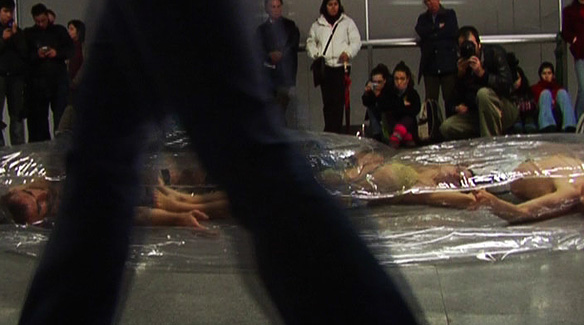 The performances Wave1 and Solo Artists 1 were thought of for locations of passage (the so called ‘non-places’!), using for that the objects and scenic devices of previous performances. Wave 1 is a performance inspired in Wave (2003), which had the participation of the musician Alexandre Soares and in which the dancers transport to a metro station the techno bags conceived by the ELASTIC Group of Artistic Research. Solo Artists 1 is the installation in a metro station of a kind of bubble, an enormous inflatable used in the performance Solo Artists (2005) which is a metaphor of isolation. The performances try once again to question the place, at the same type proposing new representations of the body in a logic of the condition of the human being, today. Solo Artists 1 is a performance created from the show Solo Artists (co-production Balleteatro, TNSJ, Rivoli 2005).
Conceito e direcção Né Barros
Dispositivo cénico Né Barros, Cláudia Santos
Interpretação Carla Valquaresma, Joana Castro, Jorge Gonçalves, Luís Félix, Ricardo Machado
Co-produção Balleteatro, TNSJ