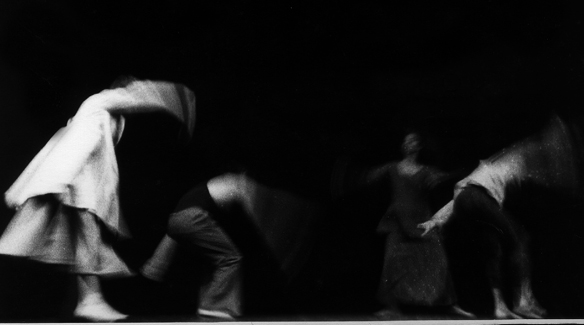 With Startle in-de-gestures the choreographer Isabel Barros begins a choreographic path characterised by an obvious dramaturgical concern. For this performance a rapport between performer/audience or interior-exterior is established from which people, characters and the role of the performance is undistinguishable. Where does it happen? In the foyer or the stage? It is by this dramaturgical principle that the choreographer constructs and shows gestures and actions whose driving force is the restlessness and the startle of the unforeseen by the mutation of roles and places.
Direcção e coreografia Isabel Barros
Música George Lettelier
Figurinos Manuela Ferraz
Desenho de luz Jorge Levi
Intérpretes Cláudia Águas, Elisabete Magalhães, Ernesto Acosta, Índio Queriróz, Isabel Agonia, Isabel Barros, Jefferson Nunes, Joclécio Azevedo, Né Barros, Susana Queiróz, Vera Santos