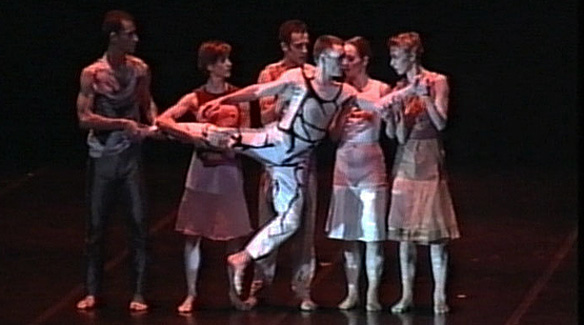 The poetry of Nava in particular “A Carne” accompanied my thoughts in the rehearsals of exo. In exo the idea of a body inside out is connected with the disfiguring, the skinning (idea embodied by the costumes), or even in a less immediate meaning, with a hypersensitive field (light was an indefinite, pulsating projection, the movement also had this quality at times), a flux (continuous - interrupted), shots, projections. An indication of meaning: to the outside. Thus, the play was built as an anti-climax, from group to solo, but as if the entire ensemble had a chaotic, intense apparatus, whose purpose would be to achieve the singular form (…). Throughout the work (…) the plastic condition that is being generated, sets the atmosphere: helpless, fleshless, un-eroticised. I notice that the anti-climax or the word un-eroticised seem contrary to the poetry of Nava. However, to me it is as if the erotic intensity of the poem is in the movement of the words (the choice and the way they are organised), not the “figure” they produce, a disturbing figure. (Excerpts from an interview to José Pedro)
Direcção e coreografia Né Barros
Música original Alexandre Soares
Figurinos Vera Castro
Vídeo e desenho de luz Carlos Assis
Bailarinos Ângela Clemente, Bernardo Gama, Laura Marìn, Pascale Mosslems, Rui Pinto, Vincent Colomos
Produção Ballet Gulbenkian Estreia Auditório da Fundação Calouste Gulbenkian