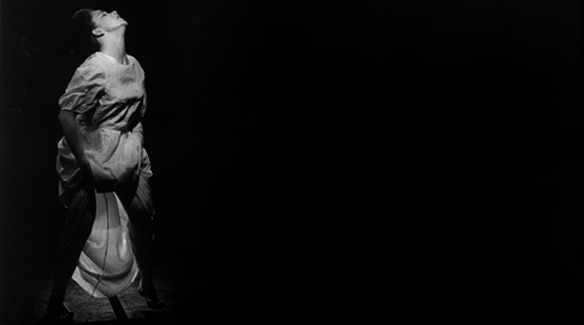 On stage a triangle is being defined by : Man-Woman on their back / Woman-Man in action / Hung bride’s dress. The Man is wearing a backless dress, the woman begins wearing lingerie and ends with a coat and boxing gloves, having gone through the bride’s dress and at the other end of the triangle, parallel to Man is a suspended bride’s dress. This way a parallel plot of motivations is created: the ambivalence of roles in the sexuality is the weight of memory itself. The weight of memory is suggested by a video screening of the Woman in her movements in the suspended dress and also by the clothes the performers wear – clothes are not any skin, they are struggling objects (boxing) or classified (wedding). In Electric it is as if we were given circumstantial harmony, or fatality that is casting signals of something more visceral. The Woman performs simple and geometrical sequences contrasting with the sound of her breathing. A Woman in a meaningless action in contrast with a male-female figure that is voicing states: sings, whispers, screams, styles – always on her back. (Né Barros)
Direcção e coreografia Isabel Barros
Dramaturgia Regina Guimarães e Isabel Barros
Direcção de figurinos Isabel Barros
Desenho de lingerie Isabel Coelho
Cenografia e desenho de luz António Real
Intérpretes Sónia Cunha
Actuação ao vivo Miguel Teixeira