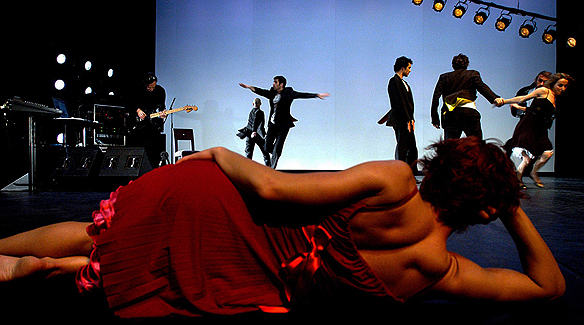 Sentenced to survive the constraints of the real’s ordain, the duality of the body producer/ decoder of signs acquires its purer meaning by confronting with the Other. Setting off from a context of experimental work, the choreographer Né Barros travels the territory of the tensions of communication and feelings towards the transcending. In Major Day, time claims to itself the fragmented dimension of physical emotions. Will there be a supreme meaning that finds in the body in motion, vehicle of symbolic thought, its primordial support? (…) Major Day, begot from the womb of a manifestly essay like work context, reveals a challenging sobriety, free of prejudices and inspiring of movements, opening up new spaces (…), of shelter and search, of analysis and questioning, ready to be occupied by the epiphany of the Other, in the confrontation of multiple relationships and feelings, in the primary proximity intrinsically violent in its passion and in the social isolation of the crowds which annul the individual in rapport to the frustrated desire, consequently, self-anthropofagic and hallucinatory. (Anastácio Neto) Anastácio Neto, in TeCA’s programme
Direcção e coreografia Né Barros
Música (composição e interpretação ao vivo) Alexandre Soares
Desenho de luz José Álvaro Correia
Figurinos Maria João Sopa
Intérpretes Carlos Silva, Elisabete Magalhães, Félix Lozano, Jorge Gonçalves, Pedro Ramos, Pedro Rosa, Susana Queiroz
Estreia Teatro Carlos Alberto Co-produção balleteatro e Teatro Nacional S. João