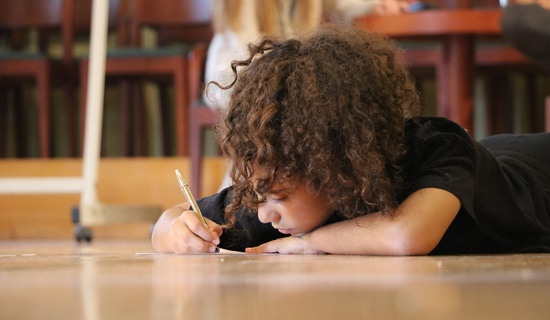 Joana Guilherme Pinto, 25, graduated in theater from the Escola Superior de Teatro e Cinema after a professional course in acting at Balleteatro Escola Profissional, and also attended a post-graduate course in dramaturgy and scriptwriting at ESMAE.
She teaches at Serviço Articulado and Escola Artística Balleteatro, and is the artistic director of Associação Cultural GAIVOTÀJANELA, which projects, among others, social works thought through theater, from which came the work "VOODPR413", co-created with the dancer and actor João Oliveira. She is a playwright at the Writers Room of the Onírico Filmes production company, having written two audiovisual series, and also participated in the award-winning film-concert "O Filho Pródigo" by Luísa Pinto and Carlos Coelho Costa, as well as in several staged readings.